Controlled re-entering spacecraft like the Space Shuttle are designed to withstand the mechanical and thermal stresses during atmospheric re-entry. But objects like rocket stages or space debris re-enter uncontrolled. Usually these objects demise during re-entry, but heavy and compact fragments may survive and reach the ground, as happened for re-entries of decommissioned space stations (Skylab, Kosmos 1686, Mir).

So far these fragments did come down in sparsely populated areas only, but for the continuously rising number objects in Earth orbit an increasing number of potential ground impacts has to be expected. To assess the on-ground risk of uncontrolled re-entry, especially the number and distribution of the fragments, a dedicated software tool is important. Especially for nuclear powered satellites this is essential. For spacecraft that are controllable at the end of their mission, such a tool can give advice on the preferable re-entry conditions to achieve complete demise, if possible.

The re-entry of a satellite is a complex physical process and not easy to be calculated. The full mathematical approach to approximately calculate this process would need using super computers. To be able to use the limited computing power of personal computers for these calculations, simplifications are necessary to apply. There are two approached to reach this: 1. maximum utilization of available resources, 2. applying further simplifications to enable parametric studies. SCARAB uses the first approach. 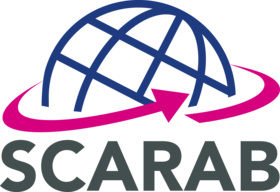 The SCARAB ("SpaceCraft Atmospheric Re-entry and Aerothermal Break-up") software has been developed to be able to simulate the re-entry of a satellite in detail. In general, the re-entry analysis starts with the modeling of the spacecraft, to generate a geometric model, which reflects the structural composition and physical properties of the satellite. After defining the initial orbit, attitude and attitude motion, as well as certain environmental parameters such as the atmospheric model to be used, the simulation is started. After the simulation is finished, the results are analyzed.

In SCARAB the modeling of a spacecraft can be very complex. The particular spacecraft components are modeled using geometric primitives, such as sphere, cylinder, box and cone, which are positioned in a way to reflect the real composition of the satellite. By defining the wall thickness and assigning a material, the thermal and mechanical properties of the primitives are obtained. Properties like mass, center of mass and moments of inertia of the finished spacecraft model are determined automatically from those of the primitives.

The re-entry simulation is then started using the complete model of the satellite. During the simulation several model properties are calculated and stored. These properties can be subdivided into three basic types. 1. properties of the whole satellite model, such as maximum surface temperature, aerodynamic coefficients ans environmental characteristics, 2. properties of particular primitives, like mean temperature or particular heat loads, and 3. local surface properties. The latter are determined by the physical properties of "panels". For the simulation the surface of the geometric primitives are divided into small triangles, called panels. For each panel the aerodynamic and thermal loads are calculated and the local heat budget is determined.

The panel based analysis provides the possibility of local destruction analysis. If a panel is molten completely, it leaves a hole inside the primitive. These holes may enable the flow to penetrate into the spacecraft, increasing the heat load on the inside. If the connecting panels between particular components are molten, the satellite or parts of it break apart. This is part of the SCARAB simulation and the generated fragments are simulated separately until they demise or reach the ground.