Earth-orbiting satellites are kept on their orbit by the action of the Earth gravitation. But also other celestial bodies, like Sun and Moon, exert gravitational forces on an Earth-orbiting satellite, but these forces are small compared to the Earth gravitation and can be considered as higher order perturbations. Gravitational forces are in general well understood and can be calculated with high accuracy. This is important to accurately predict a satellite orbit. On the other hand higher order corrections to existing gravitational field models can be derived from accurately determined orbits.

Apart from gravitational forces there are other forces influencing the orbit of a satellite. For orbits with altitudes less than 1000 km these are mainly aerodynamic and solar radiation forces. Aerodynamic forces are induced by the interaction of the atmospheric molecules with the satellite surface. While the satellite moves through the atmosphere it collides with the atmospheric molecules, reflecting them. During the reflection the molecules transfer some momentum to the satellite, which sums up to a measurable force. The result is a force acting on the satellite, which has in general not only components opposite to the flight direction (the classical "drag"), but also sideward and upward directed components, which are, however, in general small for flight altitudes above 200 km.

The radiation forces are caused by the interaction of the radiation with the satellite surface. According to quantum theory of physics, radiation can be considered as a wave phenomenon as well as a stream of particles, the so-called photons. Referring to the particle model, analogies can be found to the aerodynamic interaction. The force acting on a satellite results from the momentum exchange between photons and surface. The main radiation force is the Sun, either through direct illumination or through indirect illumination by radiation reflected from the Earth surface.

In contrast to gravitational forces the aerodynamic and radiation forces are much more difficult to calculate. The latter are surface forces, which means that they result from the interaction of an incoming flow with the surface. For the computation of the gravitational force only the field strength of the gravitational source and the mass of the satellite are required, for the computation of the acceleration even only the field strength has to be known. For surface force calculations many parameters have to be known: The satellite geometry, the local surface flow conditions, and details of the flow-surface interaction.

The satellite geometry can be composed from simple-shaped geometric objects. Each basic object has specific geometric parameters, like the radius of a sphere, the length and diameter of a cylinder, and length, width, and height of a box. These basic objects can be assembled to form a more complex compound. For the calculation of the local flow-surface interaction the object surface are divided into small triangular panels. The image to the right shows as an example the modelled GOCE satellite. The panel size can be selected by the user. 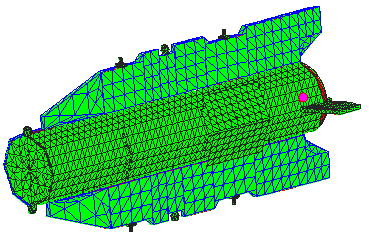 After material assignment the coefficients can be calculated. The user selects the range of flow directions to be considered, and a range of non-dimensional flow velocities (speed ratios). The flow direction is specified by two angles: the angle of attack and the side-slip angle. The range of these angles can be adapted to the corresponding mission profile. If the attitude of the satellite in orbit is unknown or if the satellite is randomly tumbling, the full possible ranges have to be considered, i.e. +/-180 degrees in angle of attack, and +/-90 degrees in side-slip angle. If the attitude is controlled, the ranges to be considered can be smaller, which reduces the computation time or gives the possibility to use a finer resolution. The speed ratio is the ratio of the flight velocity to the atmospheric thermal velocity. A typical value for a low-earth orbit is 7-8.

Figure: Color-coded aerodynamic force coefficients of the GOCE satellite for angles of attack between +4 and -4 degrees (horizontal scale) and side-slip angles between +12 and -12 degrees (vertical scale).

Calculation of forces and torque in orbit 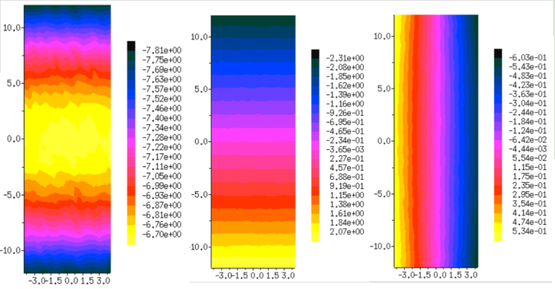